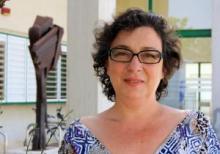 Dr. M. Luisa Bonet is senior researcher in the group of Nutrigenomics and Obesity (NUO) at the Laboratory of Molecular Biology, Nutrition and Biotechnology (LBNB) of the University of the Balearic Islands (UIB) and member of the Spanish research of excellence platform in the field of nutrition and obesity CIBERobn.

She has extensive background in molecular nutrition, nutrigenomics and physiopathology of obesity. Her main topics of research relate to the mechanisms regulating body weight and adiposity in mammals and their control by dietary factors, including the impact of early life nutrition in the programming of obesity and related health outcomes. She has focus particularly in the role of vitamin A and carotenoids in these contexts. She is also interested in the role of cell cycle regulatory proteins in adipocyte biology and the control of energy metabolism. In connection with her research, she has expertise in the relationships between diet and health, risk-benefit analysis of food, and functional foods for obesity.

Dr. Bonet has considerable experience of collaborative research and participation in national and international projects. She was Principal investigator by the UIB in: the “Carotenoids Focus Team-Window of benefit for carotenoids” (2007-08), sponsored by The European Nutrigenomics Organisation (NuGO); the project under EU Health Programme 2008-2013 SALUX (A European Network to follow-up the reformulation of food, 2011-14); and the network IBERCAROT (Iberoamerican network for the study of novel bioactive carotenoids in foods, 2012-15, funded by CYTED). She has been the scientific secretary and co-leader of a work-package of the FP7 EU project BIOCLAIMS (Biomarkers of Robustness of Metabolic Homeostasis for Nutrigenomics-derived Health Claims Made on Foods, 2010-15), and participated in other EU projects such as COST Action-918 (1998-2003), FP5 DLARFID (2002-04) and FP7 DIABAT (2011-15). Principal investigator of a project funded by Fundación Ramon Areces on nutriepigenetics in the control of body adiposity (20102-2015), and of three research contracts with industry sponsored by the Centre for the Development of Industrial Technology (CDTI) of the Spanish Government (one of them on-going).

She has produced over 75 published peer-reviewed articles, one patent, 14 book chapters (7 of them international), and over 150 contributions in scientific congresses and symposia, of which nearby 30 invited lecturers.